of the 22nd February 2010 in the case of
the slaughter of whales and dolphins
practiced by Japan, Norway, Iceland, Greenland and the Faroe Islands

Wide areas of the oceans, whose riches were not so long ago considered to be inexhaustible, are dead spaces today, while the last of the oceans’ large mammals – whales and dolphins – continue to be systematically hunted and bestially killed despite the moratorium put into place by the International Whaling Commission (IWC) and in force since 1986. Over 2’000 large whales and tens of thousands of smaller whales and dolphins are killed every year. The cruelty involved in the whale and dolphin hunt is beyond imagination. As whales have no natural enemies, their nervous system is not structured to respond to an assault or to severe pain by fainting or going into shock. They will endure their own slaughtering fully conscious up to their last breath. Thousands of dolphins are brutally captured and ill treated with the purpose of stocking and restocking dolphin fun parks which are becoming more popular and numerous every day.

While most countries have never hunted whales, or have respected the IWC moratorium, Japan, Norway, Iceland and Greenland continue to hunt whales despite the moratorium. In addition, Japan and the Faroe Islands hunt dolphins intensively.

But dolphins and whales are threatened and decimated by a great many other perils such as contamination by heavy metals and other pollutants, over-fishing and over use of the oceans by man. Their food is becoming scarce through over-fishing while thousands of kilometres of nets drifting in the seas cause an enormous amount of additional victims. Every year innumerable dolphins and whales lose their sense of orientation and get stranded on beaches or cliffs. Scientists believe this phenomenon to be a result of the increasing sound pollution in the oceans and of physiological damage caused by chemical pollutants.

Notwithstanding the high toxicity of whale meat, responsible authorities of the indicted countries continue to permit and even promote its consumption, thus putting the health and physical integrity of their citizens at risk.

Having become rare, the great whales have more and more difficulty in finding partners for procreation. The same destiny awaits the dolphins. The climate change added to all the other perils will have devastating effects on all whale and dolphin populations.

The accused having been duly convened, the Prosecutor having presented his case and the appointed attorney for the defence having made his plea, the International Court of Justice for Animal Rights composed of a jury of seven members and three judges, based on today’s hearings and the testimonies and evidence brought, accede to the plaintiffs in their petitions and

- of violation of international laws

- of deliberately endangering the lives of others by distributing food products issued from whales and dolphins whose flesh is impregnated with toxic substances, without informing the public of the dangers incurred

- The Court is appealing to the International Whaling Commission (IWC) to extend the moratorium in force for large whales to all cetaceans (dolphins, porpoises and orcas).

- The Court requires that all costal nations declare sanctuary their exclusive economic zone (up to 200 miles) where all hunting and capture of cetaceans (whales, dolphins, porpoises and orcas) be banned.

- The Court requests that the World Health Organisation (WHO) issue a recommendation to ban the sale of all products derived from cetaceans destined for human consumption (for food or any other use) and to officially inform governments and public opinion of the dangers these products involve for human health.

- The Court appeals to all governments to support Australia in her planned legal action with the International Court of Justice of The Hague against the Japanese who blatantly violate international law by their whaling expeditions in the international waters of the Antarctic. 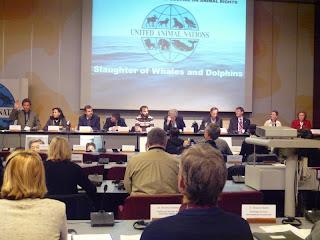 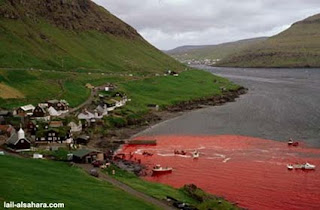